I spend a lot of time in telehealth with toddlers and young preschoolers doing pre-writing.  It requires few tools, it is easy to demonstrate, and it is fun.  But when parents tell their two year-old that they drew a circle after they scribbled in a circular pattern, I stop them.

After all, copying a circular scribble is a 2.5 year-old skill, and a very important one.  Control of a curved stroke is huge for pre-writing.

Because what you say to a child who is learning pre-writing strokes matters.  A lot.

Teaching a child that there is a difference doesn’t mean criticism.  At all.  I celebrate every circular scribble, and I demonstrate a circle when kids are ready to learn, or when I want them to scribble ON TOP OF MY CIRCLE.  Or draw a face on my circle.  You get the idea.

I want a child to notice that there is a difference, and learn what those differences are, without judgement.  This will help them understand how to execute the correct start and sequence to draw a circle when they are cognitively and motorically ready.

I am not a huge fan of teaching preschool children to trace strokes.  I am very interested in the use of simple drawing to build pencil control and other pre-writing skills.  But done right, tracing can be fun and useful for both the child and the adult.  Here is one way to use tracing effectively:  Rainbow Tracing.

What is it?  The child traces the same target stroke with at least 3 different colors before moving onto the next stroke.   If needed, the adult can initiate/demonstrate first, and the child can repeat with additional colors.  It isn’t necessary for the child to be incredibly accurate, but they do have to start at the correct spot and attempt to end their stroke at the correct spot.

The target tracing line has to be sufficiently wide and simple enough to allow for reasonable expectation of success.  An example would be that a three year-old is asked to trace a curved line, not a series of diagonals.  The developmental progression assumes that most threes aren’t ready to execute diagonal lines independently.

Why is Rainbow Tracing helpful?  By repeating a traced line, a child receives more practice for stroke control and grasp.  It is colorful, and the colors are the child’s choice.  This allows some creativity and agency in an activity that might otherwise be boring and produce very little motivation in a child.

What about a child who traces over their errors?  If a child’s initial stroke is wildly off the target, they are more likely to re-trace their error.  If the adult knows that this is going to be an issue for this child, they can offer another copy of the same sheet, or the adult can be the first “tracer”.  They could also offer an easier and wider stroke to trace.

What do you do with the results?  Celebrate it, of course!  Kids love to put their drawings in an envelope and mail them.  Scanning them isn’t as exciting to a young child.  They like doing things “old school”.  So do a lot of grandparents and great-grandparents! 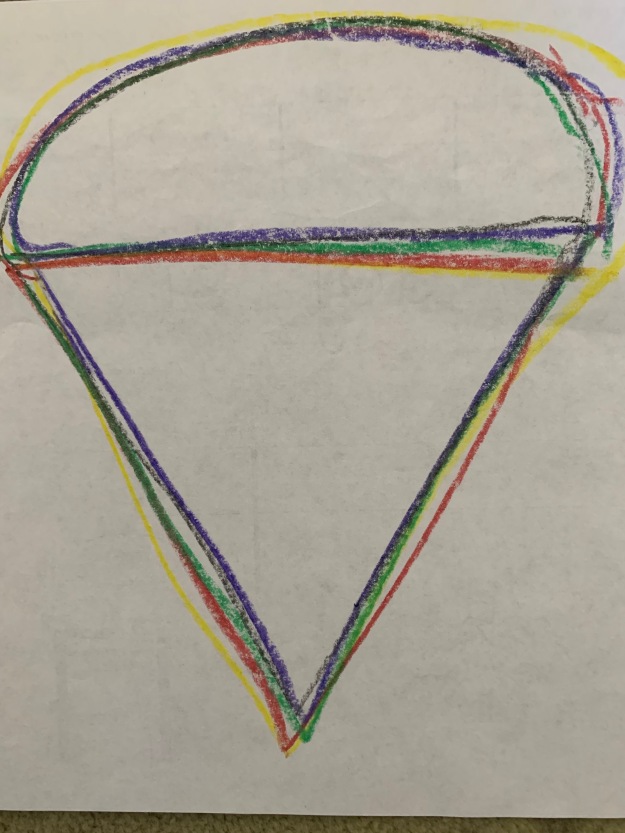 I had to look twice.  A private client showed me the picture her 4 year-old made in his school OT session (not the picture above!).  A picture decorated using a dot marker.  He can copy a vertical cross and a circle using a pencil.  I showed him how to draw a triangle in less than 4 minutes during that session.  He is very risk-averse and is probably intellectually gifted.   He has lots of sensory issues and mildly limited fine motor skills.

Why was he using a dot marker for anything?

I know his therapist isn’t very experienced, and I am sure the supplies budget isn’t huge.  But neither are good excuses for using tools that don’t raise the skill level of a child that is so hesitant to be challenged.  Those markers are great for toddlers under 2 or older children with motor skills under a 24-month level, especially kids with neurological or orthopedic issues that don’t allow them to easily grasp and control crayons.  Dot markers get children excited to make a mark on paper (an 11-month fine motor skill) and can be the first step to holding a tool to develop early pre-writing.

They aren’t good at all to develop any kind of mature pencil grasp due to their large diameter and large tip.  It would be like writing your name with a broom!

The ink tends to splatter with heavy quick contact with paper (fun to make a mess, but not therapeutic!), and doesn’t dry quickly enough.  Repeated contact bleeds colors together, and it is hard to keep within the borders of a design unless the target is very large.  I can assure you that the design above was done by an adult, an adult with some art training.

Dot markers aren’t building pre-writing skills for this child I treat.  There are so many options for activities that do build skills in kids at his ability level.  Their use can discourage a risk-averse child from working on pencil grasp.  Whatever the activity it was that they were doing, unless he was swinging on his belly on a platform swing or going down a ramp on a scooter (I don’t think he was doing anything nearly that intense) while using a dot marker, there were other, better choices to make.

Read Using A Vertical Easel in Preschool? WHERE You Draw on it Matters! and Deluxe Water Wow Pads Offer More Challenge And More Fun To Preschoolers and Kindergarteners for more good ideas on fun at home that builds pre-writing skills. 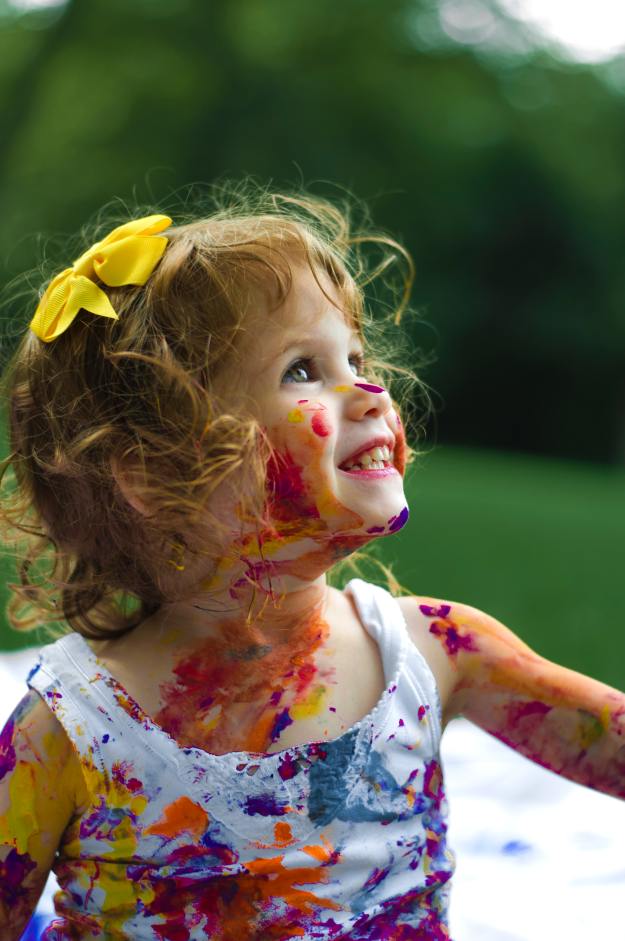 Why should learning to write mean a pile of boring worksheets?  It shouldn’t!  This week, try teaching your preschooler to draw fun shapes that mirror correct letter formation, start/sequence and connections, and watch their handwriting skills take off!

Why draw?  Because some kids need more practice, avoid writing due to fear of failure, or simply need their pre-writing practice to be more fun than traditional worksheets.  Handwriting Without Tears (HWT) does a terrific job of teaching pencil control skills in their preschool and kindergarten books, but their pages often don’t offer enough experience or variety for kids that struggle with pencil control.  I tried using multiple copies of their worksheets, but the kids I treated in occupational therapy sessions got bored too quickly.

I decided to develop tracing pages that naturally expand into guided and independent drawing practice.  As an example, kids have more fun drawing multiple large volcanos that imitate the correct formation of the letter “A” (two diagonal lines that start at the TOP) than writing the letter “A” on a worksheet ten times.  Connecting the lines at the bottom is also an easier way to teach children that they are aiming to connect the diagonal strokes when they write the horizontal line, not slashing wildly across them.

Kids usually enjoy embellishing their drawings.  This gives me more opportunities to work with them on pencil grasp and control skills.  Lava rocks are drawn as circles, and dripping lava curves down the volcano like the letter “S”.  Exploding lava can shoot out of the top of your volcano, curve and drop down onto the ground.  This drawing stroke is very similar to the tricky initial stroke that forms a lowercase “f” (a letter that trips up more kindergarteners and first graders than I can count!).  Beginning a crayon stroke at the top of the volcano is actually an important motor control skill needed for all the letters with top connections such as “F”, “D”, and “P”.   Children will work harder to make this connection because they think it is so cool that volcanoes explode!!

I use gray tracing lines for my beginner drawings for the same reason that HWT uses gray crayon strokes in their preschool workbooks.  Tracing, not connecting dots, helps kids understand that letters and numbers are made of  a sequence of strokes.  The alternative?  I see four year-olds writing the letter “L” without creating a sharp angle at the bottom; it’s a swoop.  I also see the letters “A” and “M” starting at the bottom, then curving up and around in a single line.  Oops!

An important goal of learning uppercase letters first is that these larger, simpler strokes are required motor practice for the finer movements needed to execute the trace-backs and reversals of lowercase letters such as “a”, “b”, “d”, and “p”.  I know exactly what happens if a child doesn’t have the control necessary to learn lowercase letter formation.  If I had a dollar for every letter “a” made from a little circle placed next to a short line….!

Incorrect letter formation and poor control are two of the most common reasons that children in first or second grade are identified as slow or sloppy writers and get referrals to OT for handwriting.  Not every child is able to or interested in re-learning correct handwriting skills later on, and why should anyone have to re-learn handwriting?  Don’t teachers (and OTs) have better things to do?  Teach it correctly the first time!

Fans of my simple and fun pre-writing activity Preschool Handwriting Activity: The Tally Sheet, come on back into the pool for more!  The tally sheet is a great way to keep score during a fast and fun game such as Pop-Up Pirate or Crocodile Dentist.  As this year’s group or preschoolers are approaching the stage in which they are independently writing their names in uppercase letters, thoughts turn to more challenging visual-spatial skills and grading stroke control.

Enter the more advanced tally sheet!  The original had just a baseline at the top.  I kept the HWT smiley face as a cue for starting at the top left portion of the page.  Many kids  at this age will still start wherever their crayon lands, most likely directly in front of them.

Here is what your maturing preschooler will gain from moving up to this format:

Good luck using the new tally sheet with kids who are preparing to graduate to kindergarten in the next month or two!